The Elbe has the fourth largest river basin in Central and Western Europe after the Danube, Vistula and Rhine basins and is inhabited by about 25 million people. More than 99% of the river basin is located in Germany and the Czech Republic, with less than 1% in Austria and Poland.

From its source in the Giant Mountains to its mouth in the North Sea, the Elbe River can be divided into three sections (Upper, Middle and Lower Elbe).

The largest tributaries of the Elbe are the Vltava, the Saale and the Havel rivers which occupy more than 51% of the river basins.

The Elbe River basin belongs to the temperate climate zone and is located in the transition zone from maritime to continental climate. The continental influence manifests itself by relatively low precipitation levels and large differences between summer and winter temperatures. This is the case for the largest part of the Elbe River basin, whereas precipitation levels rise the higher you get into the low mountain ranges. The Lower Elbe section is characterized by a more balanced temperature profile and relatively high precipitation levels in comparison with other lowland areas, which are typical of a maritime climate.

The annual average air temperatures are 8 - 9°C in the lowlands and 1 - 3°C at the summits of the low mountain ranges. The absolute extreme values of the river basin were measured in its southern part with a rather continental climate at +40.4°C in Dobřichovice near Prague on 20 August 2012 and at -42.2°C in Litvinovice near Česke Budějovice (Upper Vltava river basin) on 11 February 1929. But also the maritime climate of the northern Elbe region has experienced extreme temperatures ranging from +39.2°C, measured in Lübben (Spree river basin) on 09 August 1992, to -28,9°C, measured in Gardelegen (Aland river basin) on 24 February 1956.

The average annual precipitation levels range from 1,700 mm at the ridges of the Giant Mountains and the Jizera Mountains as well as in the Upper Harz Mountains and 450 mm in areas located in the rain shadow of the low mountain ranges. The average annual precipitation level of the complete Elbe River basin is 628 mm. However, the map shows significant differences in the individual regions. For about one third of the Elbe River basins the precipitation level is below 550 mm. These are mainly parts of the Vltava, Ohře, Saale and Havel river basins. Particularly low precipitation is recorded in areas located in the rain shadow of the low mountain ranges during cyclonic westerly and northwesterly weather situations. As a result, the Lower Saale region with an average of approx. 430 - 450 mm per year, the Žatec basin in the Ohře region and the Thuringian Basin in the Unstrut region with 450 mm per year are the driest areas. By contrast, annual precipitation of more than 1,000 mm is only to be found at the higher elevations of the lower mountain ranges. 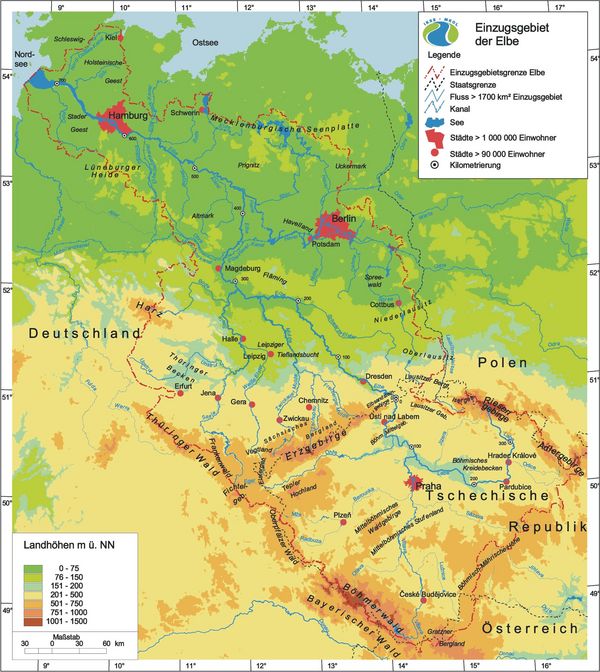 The highest daily precipitation in the Elbe River basin amounting to 345 mm was recorded in Nová Louka in the Jizera Mountains on 29 July 1897. The 312 mm of rainfall measured in Zinnwald-Georgenfeld in the eastern part of the Ore Mountains on 12 August 2002 has been the highest precipitation in one day in Germany since the start of regular measurements.

The rain-snow-type runoff regime is characteristic for this transition climate. Part of the winter precipitation is snow, which normally melts in the lower mountain ranges only in spring and which in the long-term average results in a runoff maximum in the months of March and April. Floods are often caused by regional heavy precipitation in summer, such as in the event of the floods in August 2002 and in June 2013. The lower mountain ranges only occupy a small part of the Elbe River basins. Only 2% of the Elbe region is located at altitudes of more than 800 m above sea level, more than half of the river basin is at altitudes of up to 200 m above sea level. Due to these conditions, there is a significant runoff decrease in the summer months as - in contrast to the Alpine waters - the snow and the mountain glaciers do not continue to melt in these months. The lowest runoff is usually registered in September and October.

The multi-year average runoff of the Elbe River at the mouth to the sea is 861 m3/s. With reference to the Neu Darchau gauge, which represents 89% of the complete Elbe region, the average annual runoff rate amounts to 5.4 l/s/km2. Thus the Elbe region is one of the European river areas with the lowest runoff rates. This fact is reflected in the large number of dams in the Elbe River basin. There are 312 dams with a reservoir volume of more than 0.3 million m³, 175 are located in Germany and 137 in the Czech Republic. They comprise a total reservoir volume of approx. 4.12 billion m³.

According to the data analysed within the framework of the CORINE Land Cover project in 2006, 42.8% of the area in the Elbe River basin is used as agricultural land. Forests cover 30.6%, among them is 21.9% coniferous and 8.7% deciduous and mixed forest.